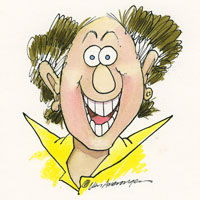 In 1978 I was living in Minneapolis with my wife and daughter. I was well along in my corporate Sales and Marketing career, 13 years and counting, when I was gripped by the need to get back to doing something creative with my hands. I just didn’t know what! Back in college I completed a two-year Commercial Art curriculum, after bouncing around in the Liberal Arts for three years. Cartoon-like illustrations were always my strong suite, so I thought I’d try cartooning.

I took some gag cartoons to a monthly community newspaper located in my neighborhood, which was an all-volunteer enterprise, so they could hardly turn me down. After a year I took some of my better efforts to our daily newspaper The Minneapolis Tribune, who agreed to publish my stuff on a weekly basis. Within the next twelve months I sent some of the better work to three national syndicates. I never heard from one, I got a form letter rejection from another and I got a phone call from the third, The Des Moines Register and Tribune Syndicate, with an offer to syndicate.

I was in Denver’s Stapleton Airport travelling on business when I got the call, which is interesting, because I had lived in Denver from 1963 to 1976 and assumed I’d always live there. Can you imagine being in your twenties, single, living in the mountain West and it’s the 1960’s! But alas, the corporate move to Minneapolis. So, it took two years to transition my way from a corporate career to that of syndicated cartoonist. Imagine my surprise!

When I was a boy growing up in Grand Rapids, Michigan (I was born there in 1940), I had no artistic roll models, and I don’t remember dreaming of becoming a cartoonist. I was more interested in Football and trying to get through my growing-up years like everyone else. In retrospect, I must have been looking pretty hard at the gag cartoons appearing in the mass-market magazines of the day. I could differentiate the art styling of the various cartoonists working then, so I must have had a greater interested in the form than I thought. I’ve said many times before, I learned how to draw by studying the work of the amazing EC Comics artists of the 50’s and later Mad Magazine. These great artists, chief among them Jack Davis, taught me how to “draw funny”. It’s the one aspect of my work I’m the proudest of. If the joke doesn’t seem funny, at least the drawings are interesting to look at. But, it’s more than that. If you draw a guy bending down to tie his shoe, that’s not funny. If you draw a hapless guy bending to tie his shoe in a way no human should, you have a joke. And, what’s more, you can provide the reader with nonverbal clues to the motivation behind his actions. I had no idea my brain had this stuff filed away until I started cartooning professionally at age 40.