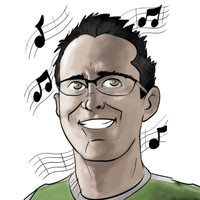 Andy Anderson (writer) spent most of last decade as executive producer of TVTonic, one of the first Web-based video services. When the company closed in 2009, Andy realized this could be his only chance to take a stab at his extremely impractical lifelong dream of creating a comic strip and began developing Recess.

A version of the strip caught the attention of Creators in 2011. Soon after, Andy partnered with the insanely talented Wil Panganiban to launch Recess 2.0.

Andy is also a musician and DJ who has spun for the likes of Kate Spade, Giorgio Armani and Andrew W.K.

Andy enjoys Campari on the rocks, shuffleboard on the lido deck and the vocal stylings of Jack White, Sarah Vaughan and the Electric Light Orchestra. He hopes that Charles Addams is laughing.