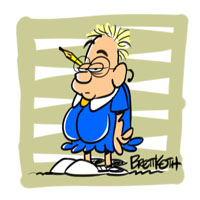 A cartoonist was all I ever really wanted to be. Never wanted to be a fireman, or a cowboy, or any of those other things. I bought my first Peanuts book at six with the dollar grandma had sent me for my birthday, and that, as they say, was that.

I’m a graduate from California Institute of the Arts, with what I like to call a BFD in Character Animation. In a past life I worked briefly in that field, in studios with names like Bluth, Filmation, Marvel and Disney. Then in 1986 I met Jim Davis, and returned to my first love – comic strips.

So much for my degree.

I’ve been with Jim ever since, collaborating with him on the writing and art for the Garfield comic strip, as well as other Garfield–related licensing and publishing projects. We’ve also worked together on two other strips, U.S. Acres and Mr. Potato Head. And somewhere in there I found the time to write and lay out the stretch run of the Bugs Bunny strip for NEA.

I’ve done a metric ton of other stuff, too, but this isn’t a resume. I’m told this site is to be interactive, so if you’re actually curious about my career, just ask me and I’ll be happy to bore you to tears.

Diamond Lil and I first met in 2008, and she began syndication with Creators in March of 2010. She’s an amalgam of the many older ladies I’ve known, and is named after my great aunt Lillian, who was quite a character herself.

I live in a log cabin next to a pond in Virginia with my wife Mona, my son Henry, my English bulldog, Bob, and around five dozen Canada geese, whose names I can’t all remember. I work in a room over my garage.

And I still have that Peanuts book.