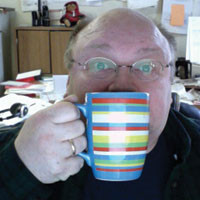 Randy began his professional cartoonist career at age 15 and began freelancing full-time after a year of journalism studies in Utica, New York. While still in high school, he became a well-known magazine cartoonist for Saturday Review, Saturday Evening Post, New Woman and many national publications. Aside from a year spent as a staff humor writer at Hallmark Cards in Kansas City, he has been a full-time freelance cartoonist since 1976.

More than 25,000 Glasbergen cartoons have been published in magazines, newspapers, calendars, books and greeting cards all over the world. His cartoons have been published by American Greetings, Hallmark Cards, Reader's Digest, Good Housekeeping, Cosmopolitan, Woman's World, Playboy, Recycled Paper Greetings, McGraw-Hill, The Wall Street Journal, Harvard Business Review, Physician's Weekly and many others.

Randy has authored three best-selling cartooning instruction books, published by North Light Books. Several collections of his cartoons have been published in the United States, England, Portugal, Germany, China and The Netherlands.

Randy lives in a small town in rural New York State with his wife and an assortment of dogs, cats, guinea pigs and fish. He works at home in a cluttered studio that occupies the third floor of his creaky old Victorian home (formerly a boarding house for local school teachers). When he’s not at the drawing board or computer, Randy enjoys walking his basset hounds and spending time with his family. He is a collector of Popeye, Monkees, and GI Joe memorabilia and a fan of amateur women’s roller derby.