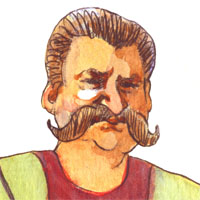 I was born and raised in Regina, Saskatchewan, Canada, as the youngest of three kids. My older brother Brian and my older sister Judy paved the way through the gauntlet of teenage hood, and I graduated from high school in 1979.

I started as a paperboy when I was 12 and went into the grocery business when I was 15. After about 28 years in retail, my brother Brian and I had started a dream of getting a cartoon of our humor published and eventually syndicated.

Persistence prevailed and the “Chuckle Bros” were launched in November of 2006. I left the retail business in 2007 to move near my brother and pursue the cartoon full-time. At the time the Chuckle Bros were actually three people, me, my brother, and an independent artist. This artist, however, was not destined to be a part of our dream.

Facing the early demise of the “Chuckle Bros” in the fall of 2008, I had no choice but to step in and take over the drawing. Fortunately, I was doing the story boarding anyway, and I knew I had some drawing ability, but not having any formal artistic training, I had a huge learning curve ahead of me. With my brothers’ help and tremendous encouragement, I have managed to gain the confidence to help keep the “Chuckle Bros” alive and kicking so we could continue to give our fans what they want.

My spare time passion is golf, and I am also the superintendent of a local top rated golf course. I am married to Bonnie, my wife of 24 years and we have a dog and two cats, but no kids.