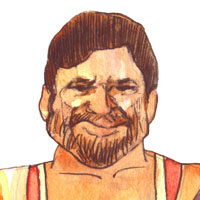 Brian was born into the family of a high school, chemistry teacher father and a classically trained, violinist mother in Regina, Saskatchewan, Canada, in 1957. The eldest of three children, Brian constantly found himself on the business end of the disciplinary stick and became very inventive at talking his way out of trouble. This penchant for turning a phrase would eventually become the seed for his future cartoon career.

One day, at the tender age of six years - while sitting on the stairs clutching the balusters and looking down on his mother, who was practicing the violin - Brian said, "Mom, some day I'd like to play the violin just like you." It was soon afterwards that he took up the instrument and very quickly showed a natural proficiency for it. His talent caught the attention of the Director of the Regina Conservatory of Music, Dr. Howard Leyton-Brown - himself a former concertmaster of the London Philharmonic Orchestra - and for the next 13 years, they fostered a musical and personal friendship that saw Brian win virtually every violin competition he entered. Soon his wall was plastered with first-place certificates from every major music festival in the area. He joined the semi-professional Regina Symphony in 1970 and worked his way up to concertmaster for his final two seasons there. In 1975, he became the youngest-ever concertmaster of the National Youth Orchestra of Canada and in 1977, attended the International Congress of Strings in Seattle, Washington - again as concertmaster. In 1978, he auditioned for, and was accepted into, the highly prestigious National Arts Centre Orchestra of Canada, based in Ottawa, Ontario, Canada - being only the second-youngest person ever to have accomplished this feat.

Throughout his high school days, Brian was very involved in both musical and sports-related activities. He was concertmaster of his high school orchestra for his five years at Campbell Collegiate (grades 8-12) and was the concertmaster of the Regina Intermediate Orchestra - while at the same time being a part of the school's volleyball and basketball teams, which both eventually ended up winning city championships.

As a professional violinist now for the past three decades with Canada's internationally-acclaimed National Arts Centre Orchestra, Brian's humorous antics within the group have earned him the reputation of 'resident clown'. This honorary title quickly brought him to the attention of the legendary comedian and frequent guest artist, Victor Borge, who was fond of using Brian as his 'straight man' each time he performed with the Ottawa-based orchestra.

A self-professed renaissance man with a passion and enthusiasm for life, Brian's many interests include juggling (he started a local juggling group called 'Jugglers Jam', which at one time boasted the largest membership in North America), cars (his first car was a classic 1965 Ford Mustang, but his tastes have slowly evolved to the point where he now owns a pristine 1987 Jaguar XJS 12-cylinder sports coupe), sports (he can still hold his own against his brother in a game of golf), puzzles of all kinds (he loves to keep his mind active) and graphic design (his eldest daughter is now pursuing a career in graphic design through the University of York in Toronto). In 1996 he founded the graphic design studio, Creative Designs.

The Chuckle Bros story actually began several years ago in a tiny cabin on the shores of the Atlantic Ocean. Brian remembers clearly the moment he decided to turn his dream of creating cartoons into reality. Growing up, he and Ron had been indelibly impressed with the single-panel cartoon work of Herman and, later, The Far Side: to them, Unger and Larson were masters at combining art and the written word, and it was this standard of cartooning excellence that ultimately inspired the two brothers to create their own singular work.

It was during his 2003 family vacation on Prince Edward Island that Brian finally started documenting his vivid free-thought process. By the end of the first evening, he was inspired to write down ideas for twenty cartoons. Within a week, that number had grown to over 100 ideas. Buoyed by his brother's enthusiasm, Ron worked with Brian over the ensuing months to develop another 200 ideas. Ironically, neither of them possessed the necessary drawing skills, so they set out to find an illustrator. Their search continued for months and just when they had all but given up hope, Brian accidentally stumbled across a local Ottawa man by the name of Ronnie Martin. As fate would have it, Ronnie was also looking for a creative outlet for his formidable drawing skills and voila, the Chuckle Bros cartoon was born.

Aggressively pursuing syndication, the trio initially landed a contract with Toronto-based Torstar Syndication Services in October of 2006 and one year later struck up a deal to also become part of the Los Angles-based Creators Syndicate's stable of artists.

However, destiny has a funny way of revealing itself and in the latter part of 2008, after much personal soul-searching, Ronnie realized that cartooning was not for him and he decided to pursue other creative business interests outside of cartooning. Ron, who had been quietly honing his drawing skills as the official Chuckle Bros' storyboard artist for the past several years, stepped up to the plate to deliver a home-run combination of continued excellence, amazing adaptability and imaginative flair.

Brian continues to balance his musical life with his new-found cartoon life and things are never dull at the Boychuk household. As the elder brother and unofficial spokesperson of the Chuckle Bros duo, Brian is finally channeling his love of humour into a vocation - one that promises to "make 'em laugh".