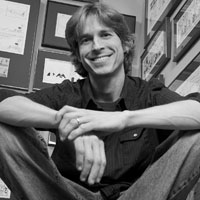 There are a couple of groovy events coming up soon. On Friday, September 21st, there will be an opening reception for “First Contact: UFOs, Aliens and Broadway” at Gallery New World Stages in NYC. The gallery will be chock full o’ great cartoons by brilliant cartoonists, and a few by an average cartoonist. Even better, it’s a fundraiser for the National Parkinson Foundation. Details are here: http://www.hangingart.org/ufo/

The following week is the Kenosha Festival of Cartooning, which runs September 27-29, and features presentations and classes by Greg Cravens, Hilary Price, Michael Jantze, Stephan Pastis, Norm Feuti, and, well, me. Sorry. The schedule looks like a blast, and I hear Kenosha has beer. Details are here: http://kenoshacartoonfest.blogspot.com/

I won’t be in NYC for the reception, but hope to see you in Kenosha. I’ll be the guy who needs a haircut.

(More NCS/USO blogging to come, just had to get this one in there before the events were over)

I’m sure many people think of cartoonists (if they think of them at all) as ill-dressed, hygienically challenged loners scribbling away in an old attic, their buzzing brains just a few bees short of a swarm. And by “many people”, I mean my family.

But every once in awhile, those of us who daydream and doodle for a living do actually leave our attics/basements/wine cellars and get together to talk shop. And by “talk shop”, I mean drink and draw on cocktail napkins together during the Reuben Weekend, which is an annual event put on by the National Cartoonists Society.

The NCS is a professional organization, so all of its members are working cartoonists. The Reuben Weekend is a chance for us to pat ourselves on the back by giving out awards to each other (as well as non-members who’ve done exemplary work), attend seminars, and generally misbehave. However, the NCS has also done some amazingly good things, such as set up visits to children’s hospitals, coordinate house repair with Habitat for Humanity, and organize auctions to raise money for various other causes. These types of events, unfortunately, were sporadic due to the difficulty inherent in organizing them. NCS members are scattered across the country – and in some cases, overseas – so coordination can be tricky. But the main problem is that the NCS is run by volunteers who can only organize so much without cutting into their work schedules. I’ve known many cartoonists who’ve worked tirelessly to make the NCS a better organization at the expense of lucrative freelance gigs.

Then one day about 5-6 years ago, at a General Meeting of NCS members, a tall fellow with an aerodynamically shaped bald head stood up and introduced himself as a newer member. Jeff Bacon (call sign: Old Navy), retired Navy Captain (and oceanographer – pretty cool) and author of the fantastic cartoon “Broadside” which is published in the Navy Times, among other places (blog is here: http://www.militarytimes.com/blogs/broadside/) had a great idea: Why didn’t the NCS partner with the USO to visit VA hospitals and troops? The reaction from the NCS Board (which I was on) was immediately positive; then again, if I had a nickel for every time someone had a great idea but expected everyone else to follow through on it for him, I could pay for my daughter’s college in cash. Ah, but Jeff was different, and not just the shape of his head. He took the proverbial ball and ran with it. Within the year, cartoonists were drawing for wounded veterans at hospitals stateside. Those visits were so popular that the USO agreed to send a handful of cartoonists to Landstuhl, Germany to draw for and caricature the injured who were more recently injured downrange (mostly Iraq and Afghanistan). And then those were so successful that the USO/NCS partnership has sent cartoonists to multiple bases in Iraq, Kuwait, Qatar, Bahrain, and Afghanistan, as well as the aircraft carrier the USS Enterprise.

As it turns out, the USO and NCS have a long history. Brilliant cartoonists, such as Bil Keane and Morrie Turner, were actually sent to draw for troops in Vietnam…DURING THE WAR. Not sure how they held their pens steady. Hell, I’m not sure how they held their bladders steady, but I certainly won’t be bragging about my adventures any time soon, no matter how potentially dangerous they might have been…

It’s an honor and a privilege to have been asked on a few of these trips, about which I’ll be blogging more soon. Just wanted to put out the backstory first, and give a shout-out to the man who made it all happen.

“You are about to begin reading Dave Coverly’s new blog, 'If on a very late night a cartoonist'. Relax. Concentrate. Dispel every other thought. Let the world around you fade. Best to close the door; the TV is always on in the next room. Tell the others right away, “No, I don’t want to watch TV!” Raise your voice – they won’t hear you otherwise – “I’m reading! I don’t want to be disturbed!” Maybe they haven’t heard you, with all that racket; speak louder, yell: “I’m beginning to read Dave Coverly’s new blog!” Or if you prefer, don’t say anything; just hope they’ll leave you alone.”

The best blogs always start by plagiarizing the author’s favorite writer, right? (And I won’t say that you haven't lived if you haven’t read any Italo Calvino, because, you know, you’re obviously alive, but if you feel like checking out a human being who completely mastered the art of writing, give his books a try).

As way of a real introduction, I’m hopeful that I’ll be writing here on a regular basis – at least weekly – and that there will be stuff about the creative process; ideas that didn’t work; cartoonists who influence me, both alive and formerly alive; and other stuff that influences my work. What I’m having for lunch, religion, politics, and shit my dad says will most definitely not be included here, and I won’t be posting cute or witty memes. That’s what Beelzebub’s website, Facebook, is for…

Coming next: Something pretty cool that cartoonists do when they're not drawing or daydreaming...