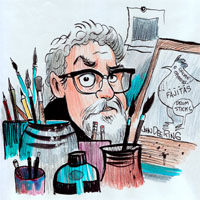 John Deering is a lifelong Arkansan. He attended the University of Arkansas at Little Rock, where he studied fine art. In 1981, he got a job at the Arkansas Democrat, (now the Arkansas Democrat-Gazette), working in paste-up, but soon moved up to editorial, creating maps, charts and illustrations. He became a regular cartoon contributor to the “Voices” page, and within two years his political cartoons were winning first-place awards from the Arkansas Press Association for political cartoons. In 1988, he was promoted to the Democrat’s chief editorial cartoonist.

John’s political cartoons have been featured in Time, Newsweek, the Sunday New York Times and have been shown on NBC Nightly News, ABC and C-SPAN. He is a frequent contributor to USA Today. He won the Fischetti Award for cartooning from Columbia College, Chicago, in 1994, and the Berryman Award given by the National Press Foundation in 1996. His comic panel Strange Brew appears daily in the Arkansas Democrat-Gazette, as well as other papers across the country and overseas. He has a second comic feature, Zack Hill, now syndicated by Creators Syndicate.

John and his wife, Kathy, live in Little Rock with their two sons, Will and Matthew. Their daughter, Elizabeth Deering Morris, teaches art in the Little Rock public schools, and is the mother of Deering’s grandchildren: Mickey, Sue and Maya.