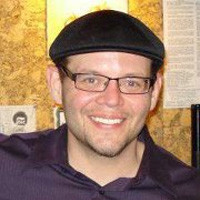 Like many of my ilk, I was born with a pen in my hand. My mom still has the surgical scar. Not that I've ever seen it - that would be weird. But take her word for it... I've been giving her the money I've earned drawing for years now.

Medical bills aside, I make my living as an artist, and have done so since I was old enough to quit my job at Wendy's. I attended Rhode Island School of Design for illustration, and worked with pen and ink, ultimately ending up in Orlando. I trained there as a computer animator and effects artist, and quickly jumped into television animation on a show called "Auto B Good." Heard of it? Neither had I... but our team won an Emmy for animation while working on it. I also worked on a few films here and there, doing space ship stuff and cool explosions mostly.

Living in Minneapolis in 2007, with one foot planted firmly in the notion of getting to LA, my grandfather, Johnny Hart, passed away suddenly. I returned home in haste - and in the midst of a logistical whirlwind - began working on BC. Its funny how life can turn on a dime. My grandfather and I were close. In my grief, I took great comfort in being back home with my family, and quickly found that the greatest healing came in carrying on the legacy of my grandfathers' creations. Being home also offered me the ability to join forces with my younger brother Mick, who was developing a strip of his own called "Dogs of C-Kennel." I came in early on to develop the look and feel of it, and we now partner on it with him as the writer and myself as the artist. We launched in Oct. 2010 with Creators. Go us!

As of now, my brother, mother, aunt, grandmother and I co-direct the relative sanity that is a family business in charge of three comic strips. Mick has developed into a fine writer, taking on a head role for writing Wizard of Id as well as Dogs of C-Kennel. My mother Patti is the business coordinator, which makes her responsible for ... everything. My Aunt Perri, is a contributing writer, letterer and colorist. And my grandmother keeps us from strangling each other with piano wire. Its a team effort.