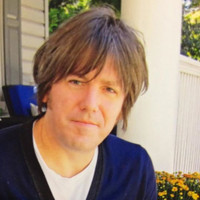 Peter Gallagher was born and raised in New Jersey in a family of nine brothers and sisters, where everyone was always drawing and playing sports. He played high school and college baseball, winning the 1983 Paramus Catholic HS Gusto Award. He worked his way through college in the art departments of silk screen factories and several small advertising agencies.

In college he began playing rock and roll. He is the lead singer of the band Holmes whose songs have appeared in many commercials and tv shows, including Quentin Tarantino's Kill Bill Vol.2 and Dog: The Bounty Hunter.

His love of drawing and the Garden State was brought together in his comic strips The Jersey Tomato and Tales of the Jersey Devil which appeared in Weird New Jersey Magazine.

In 1994, Peter joined the family business- working with his uncles George Gately and John Gallagher on the comic panel Heathcliff. Upon their retirement in 1998, he took over sole writing and drawing duties and continues to this day. In 2013 Heathcliff celebrates its 40th anniversary and has signed with family based Waterman Entertainment to produce a CGI/live action feature film in 2014.

He lives in North Jersey with his wife Armine and son Luke.