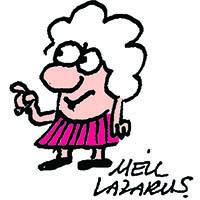 Here’s what I’ve done, so far:

Creator of the syndicated comic strips “Momma” and “Miss Peach.”

Author of “The Boss is Crazy, Too” (a novel published by The Dial Press in 1964, which was optioned at the time by David Merrick for Broadway.)

Author of “The Neighborhood Watch” (a novel published by Doubleday in 1985 which also enjoyed several movie options. Currently adapting the book as a screenplay.

A juvenile book (“Francine, Your Face Would stop a Clock”).

Approximately 15 anthologies of “Momma” and “Miss Peach,” in the U.S. and Europe, including “THE MOMMA TREASURY.” published by Andrews & McMeel, circa 1975.

Wrote three Actors Equity Showcase plays in the 1960’s (“Everybody Into The Lake,” “Elliman’s Fly,” and “Lifetime Eggcreams.”)

Lecturer (many, many, times, most recently at the Charles Schulz Museum).

Two-term President of The National Cartoonists Society, the world’s largest and most important organization in the profession.

Currently adapting his novel “The Neghborhood Watch” for the screen.