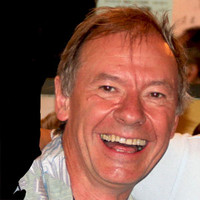 Born 1957 in Dunedin, New Zealand. At the age of 15 he moved with his parents to England then on to Canada, where he worked at various jobs from loading grain ships in Thunder Bay, to surveying on the West Coast. Editorial cartoonist for the Victoria Times Colonist for 34 years, Raeside's editorial cartoons have appeared in over 400 newspapers and magazines worldwide.

Raeside’s The Other Coast comic strip was created in 1992, and picked up by Creators Syndicate in 2000. Featuring Vicky, Toulose, and their two dogs, The Other Coast has a definite environmental/animal slant and is now featured in over 200 newspapers worldwide.

Raeside is the author of fourteen books. Among them: There Goes the Neighbourhood - an Irreverent History of Canada, The Demented Decade, and 5 Twisted Years. He also wrote and illustrated the popular Dennis the Dragon series of children's books - soon to be re-released.

Raeside's two latest books became bestsellers: No Sailing Waits and Other Ferry Tales- 30 years of Raeside BC Ferries Cartoons, was published by Harbour Publishing in May 2012, along with The Rainbow Bridge - A Visit to Pet Paradise. A heartwarming tale of a boy and his dog, and the special unbreakable bond between them. The Rainbow Bridge deals with the loss a pet, and a must-read for anyone who has ever loved and lost a pet.