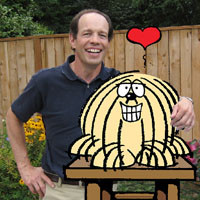 My recipe for success: As the art teacher’s pet in elementary school, I was rewarded for my drawing ability. At age 12, I?copied a Mort Drucker caricature from “MAD” magazine and actually received a compliment from my older brother. For the next 7 years, I continued to copy from “MAD” still imitating Mort Drucker, but adding Paul Coker and Jack Davis. By mixing that combination with a heavy dose of Charles M. Schulz, I became a self-taught cartoonist. With a dash of two-years-at-American-Greetings and a pinch of “Ann Landers,” I created “Ask Shagg.” It’s been baking in the oven now for almost 33 years and it’s not done yet...I think it could use more salt.