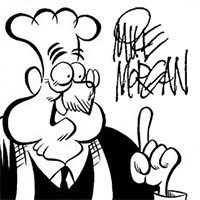 The Rev. Mike Morgan is senior pastor of Trinity United Methodist Church in Cartersville, Ga., and creator of the nationally-syndicated weekly comic strip, “For Heaven’s Sake.”

Mike is a native of Conyers, Ga., and holds degrees from Young Harris College, the University of Georgia and Emory University. He has worked as a newspaper artist for The Atlanta Journal-Constitution and as an editorial cartoonist for The Macon Telegraph. He is a member of the National Cartoonists Society.

In 1991, Mike began writing and drawing “For Heaven’s Sake,” a weekly comic strip that celebrates the faith and pokes fun at the foibles of the congregation and staff of the fictional Mainline Memorial Church. “For Heaven’s Sake” is distributed by Creators Syndicate.

Mike has been married to Karen since 1980. They have two sons: Daniel, a student at Kennesaw State University, and Thomas, a graduate student at Georgia Tech, who lives with his wife Sara in Atlanta.