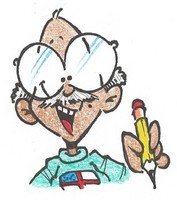 When you look through the photo album of the Bentley family, Stephen was the one holding the pencil even before he could hold up his head. It was apparent, at that early age, that drawing was going to be a big part of Stephen's destiny.

Born in Southern California in 1954, Stephen grew up in the South Central area of Los Angeles. In the late '60s, his family moved to Pasadena, where Stephen attended and graduated from John Muir High School in 1972. After high school, Stephen spent a short stint in the U.S. Navy, lending his artistic talents to the base newspapers where he was stationed.

Once in the business as a professional artist, Stephen worked for various advertising agencies, whose client list included the Los Angeles Dodgers, Wham-O Toys, the Playboy Channel and Universal Studios.

After attending a high-school reunion and re-establishing an old friendship in 1998, Stephen was inspired to create the comic strip Herb and Jamaal -- as a tribute to lasting friendships and a reflection on a life well lived.

Today, Stephen is a single father who lives in Northern California with his teenage daughter, Natalie. He is actively involved as a youthworker in the Episcopal Church and spends his free time (as if there were such a thing) brewing beer for fundraisers, and is studying to become a deacon.