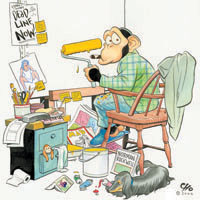 The second of three children, Frank Cho was born in Seoul, Korea in 1971, but moved to the United States at the age of six and was raised in Beltsville, Maryland. After graduating from High Point High School in 1990, he attended Prince George’s Community College and was offered a scholarship to attend the Maryland Institute College of Art in Baltimore, which he declined because he disliked the school’s academic focus. Cho ended up transferring to the University of Maryland School of Nursing, which he says was his parents’ idea. Cho ultimately graduated with a B.S. in Nursing in 1996.

Cho received no formal training as an artist. He got his start writing and drawing a cartoon strip called University2 for The Diamondback, the student newspaper at the University of Maryland, College Park. After graduation, Cho adapted elements of this work for use in a professionally syndicated strip, Liberty Meadows. Cho signed a fifteen-year contract with Creators Syndicate, which he later realized was unusually long and, perhaps jokingly, blamed on having a bad lawyer. Growing tired of newspaper censorship, Cho severed his contract with Creators Syndicate, and ultimately converted Liberty Meadows to a monthly publication.

Cho has also drawn a wide variety of other professional material, including a new version of Shanna the She-Devil in 2005 for Marvel Comics. His Shanna series was originally meant to feature “mature” artwork including nude drawings of the heroine, but Marvel later decided to have Cho censor his already completed pages for the first five issues, and the 7-issue series did not feature nudity. However, Marvel plans to release a hardcover collection, which will contain the uncensored artwork.

Frank Cho pencilled issues 14 and 15 of The New Avengers for Marvel comics. These issues include trademark Cho-isms; the character of Wolverine is depicted wearing a t-shirt that bears the logo “Beltsville”, and many Liberty Meadows characters make cameo appearances.

In 2007, Frank Cho was the artist on Marvel Comics’ flagship Mighty Avengers with writer Brian Bendis, though he left the book with issue #6. The work on those issues won him the Eagle Award as 2007 best penciler. He’s also plotter and cover artist of Dynamite Entertainment’s Jungle Girl.

Frank Cho has won many awards, including: the prestigious National Cartoonists Society’s Awards for Best Comic Book and Book Illustration, the Eagle Award, the Charles M. Schulz Award for Excellence in Cartooning, Scripps-Howard Award for Best College Cartoonist, College Media Association for Cartooning, and the Max & Moritz Prize, for Best International Comic Strip. He was also nominated for the coveted Harvey and Eisner Awards.