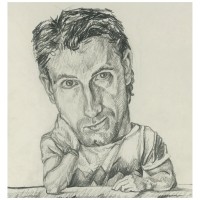 Jim grew up in a small house surrounded by books, TV, newspapers, magazines, Safari Cards of Knowledge, shag carpet, and older brothers.  His first foray into cartooning (and most successful to date) was in seventh grade when he made roughly 11 dollars drawing cartoons and monsters on classmates’ book-covers.

Through high school and college Jim dabbled in artistic stuff, but decided to be responsible and pick up a few degrees in computer science instead. But his creative bug wouldn’t die; apparently it was some sort of cockroach.  Around 2002, as an experiment, Jim put together a comic strip called Zoo Illogical. Those comics went nowhere other than, many years later, into his kids' lunch boxes. Recently Jim decided to take up some creative activity as a counterbalance to busy work and family life, and decided that single-panel gag comics were the medium that best fit his tiny bits of free time and his tiny attention span.

As a freelance cartoonist, Jim’s work has appeared nowhere.  Magazines not publishing Jim’s work include Reader’s Digest, Highlights, Yoga Journal, Guns and Ammo, and National Review. He has written and illustrated little so far, and has not recently won significant awards for his cartooning work or for any other reason. He did not contribute to several New York Times best-sellers nor has he recently completed his third fantasy novel for the young adult market. But he’s having a great time creating Magic Coffee Hair comics and is exploring other creative endeavors. He curiously wonders where this all will lead.