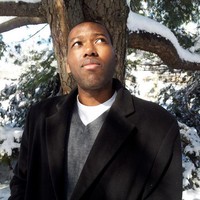 Randy Richards was born in New York but raised on the southside of Houston, where he learned to appreciate the finer points of barbecue, year-long warm weather, and screwed and chopped music. Why he left Houston to grind out New York winters is anyone's guess. Oh yeah - he went to school up here and fell in love with the city at the time.

He got the drawing bug way back in elementary school when his friend Greg Osborne introduced him to Garfield. From there, he was inspired to draw a grizzly bear who got pelted with pies and did a riff on the Twilight Zone. The dumb bear eventually got the name Boomer. He was soon paired off with an acerbic dog named Dakota, and the rest is (soon to be) history.

His hobbies include eating, talking about food, working out, eating, cursing Michael Bay for ruining the Transformers, crossword puzzles, Ruzzle (no Candy Crush - we can do better than that), mourning shows that were cancelled too early (Happy Endings and Young Justice - you were too good for this world), cooking (so I can eat it), thinking about eating, and lamenting the ineptitude of the Houston area sports teams (remember - there's an extra S in Houston Asstros).