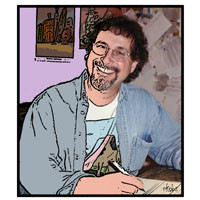 Rubin , 24, is a two-time winner of the Nobel Peace Prize and 1st place runner up on Dancing with the Stars where his polka to "Talk to the Cows" stole the show. He was told that he was "too talented" to be a contestant on American Idol.

Before he started drawing "Rubes," he was a theoretical physicist, whose insights into the nature of space and time earned him an additional Nobel Prize for Deep Thinking. He said some of those insights came to him during his four Super Bowl victories - each of which featured dramatic 4th-quarter comebacks engineered by Rubin's brilliant play at quarterback.

His first full-length Rubes film, "Think Like a Cow," won best dairy picture at the Cannes Film Festival, and is currently screening in the South of France.

He is a two-time runner-up in People Magazine's "Sexiest Man in the World" issue. "Damn that Brad Pitt," Rubin has said.

He lives in a Fortress of Solitude somewhere in the Arctic Circle or so it is rumored.